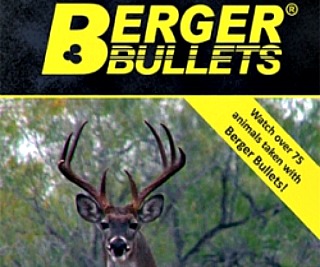 Get a free game hunting DVD from Berger Bullets.

Walt Berger started making rifle bullets in 1955 because he believed he could make better bullets than those that were available at the time. He regularly participated in bench rest shooting competitions (and still does today), which requires the highest levels of precision in all components. In 1987, Walt grew his bullet making operation beyond a part time hobby after encouragement from his second wife Eunice (Walt lost his first wife Mary to cancer). Together, they grew the business into a large scale precision rifle bullet making operation.

Walt Berger's core beliefs and values are the foundation upon which Berger Bullets continues to build and evolve. One of these beliefs is the idea that "if a job is worth doing, then it's worth doing right." One of their responsibilities to you, the customer, is to always be envisioning the future on how they can constantly improve their products and services. It is their belief that making tomorrow better is accomplished by never being satisfied with what they know today.

Request a free copy of their Berger Bullets Hunting DVD.

In this DVD, you can witness for yourself what game hunters all over the world have experienced first-hand. Berger Hunting Bullets are the best at two things:

Match Grade Accuracy - Giving you the best chance at successful shot placement at the widest range of distances.

Terminal Performance - Using initial penetration combined with fragmentation and a massive transfer of energy to put your animal on the ground fast.

This video doesn't show a handful of perfectly executed shots, rather 28 minutes packed full of over 75 animals being harvested with Berger Hunting Bullets from short to long range.

In addition, this DVD has numerous brief technical videos that further explain their bullets. You will learn how they work, how they differ and some additional tips on how to use them in your hand loads.

Email them or complete the online form to request yours today.